A weekend in Sofia

From Nuremberg to Sofia with Wizzair 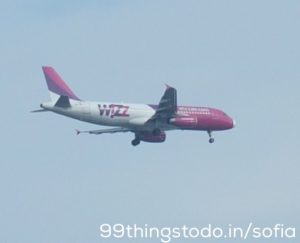 For some time there is a fly from Nuremberg to Sofia offered by Wizzair. So what is more obvious than visiting this unknown city? Said, booked.

Wizzair has really strict hand luggage rules, that is why I decided to book the „plus“-ticket, which allows a normal hand luggage of 56 x 45 x 25 cm and and a checked baggage. At the airport I have seen, that the staff strictly controlled the rules. Wizzair is the only airline I know, that names „normal hand luggage“ as small. For this reason my oneway flight costed 70 €, quite much for a one way flight with a low cost carrier.  Anyway…

My flight started fridays at 4 p.m. and 2 hours later I arrived in Sofia. One hour time difference included I was at 7 p.m. in Sofia. As always, low cost carriers do not land at the top terminals of airports. So it came, that the aircraft landed at Terminal 1 of Sofia airport. Well, terminal 1 seems to be the stepchild of Sofia airport. The arrival part of the terminal is a bit rundown and neglected. There is at least a small cafeteria and one ATM, which was well attended. The only possibility to get Bulgarian Leva easily.

Just behind the customs area were the taxi-guys waiting, the internet warned me of. Because I was informed, I knew that the only trustworthy taxis wait at the official taxi stand.  My plans were different, anyway.

By subway into the city centre

For some time there goes a subway – the metro line 1 – from the airport into the centre and back. Well prepared as I was, I knew that I just had to enter the metro and leave it after 13 stations. So much for the theory. Unfortunately I occasionally make the mistake, that I don`t care at which terminal I arrive. You might guess it – the subway goes from the good terminal – terminal 2. Not at the stepchild terminal 1. No problem, after googling, I figured out, that there is a free shuttle-bus to Terminal 2. In the meantime I talked to some other people and it turned out, that the shuttle goes only until 6:30 p.m. We were at the official bus stopp of line 84 and it seemed, that this bus also goes to Terminal 2.

The bus arrived and 5 Germans wanted to buy a ticket – each with a 50 Leva note, which is worth approx. 25 €, for a bus ticket that costs 1.6 Leva.  The bus driver was in a hurry and he also said (as far as I understood his gesture) that he has no change. Ok, just until terminal 2 – we stayed on the bus. After a while of starring on google maps we became aware, that we are not going to another terminal – we were driving into the centre. That was not planned, but nevertheless the bus went into the right direction. Finally we went until the last stopp Sofia university without any ticket. At the subway station the machines didn´t accept banknotes or credit cards too, but there was a ticket desk. Happy end. So I went just two last stopps until Opalchenska by subway. From there I had to walk ten minutes until my hotel.

I booked an affordable 4* hotel close to the centre of Sofia. The name of the hotel is Best Western Plus Bristol. It is very convenient, the room is ok, the bed was great, Wifi is good, but the breakfast was not my taste. All in all I have been happy with my choice.

On tour in Sofia

In the evening I took my camera and explored a bit the city… and talented like I am… I just walked through a nationalist demonstration close to the church „Sveta Petka Samardzhiyska“ – directly through the Square of Religious Tolerance with Banya Bashi Mosque – where am I?

But ok, the demonstration was very little. Later I was impressed by the exposed ruins of the old, historic roman settlement Serdica, which was just released in April 2016. 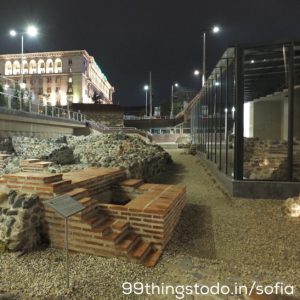 On Saturday I walked the whole day through the city of Sofia. For me, this is a part of exposing a city: walking, walking, walking – looking around the next corner and maybe around the next one too.  My pedometer counted more than 30.000 steps for this day. Most of the time I was in the area between Mall of Sofia and Alexander Nevsky Cathedral. Some places I crossed maybe three times, but I also saw very interesting things. Actually my plan was to visit the „Position Chrome Label Night“ in the Club Mixtape 5 – but I was to tired in the end.

Because I was walking through the city centre the whole Saturday, I considered some excursions for Sunday. First I went (again through the city) to Sense Hotel. which is close to Alexander Nevsky Cathedral. The reason why I went there is the rooftop bar in  the 9th floor from where you have a fantastic view on the cathedral and the whole city.

Little side note: Between 11 and 12 a.m. there is no food to get at the restaurant. To late for breakfast, to early for lunch.

My next destination should have been Vitosha mountains to enjoy the view on Sofia. The lift Simeonovo up on the mountain works only Saturdays and Sundays – actually perfect for me – but the mountains disappeared in the clouds. I had to find a plan B. So I went by subway from  Sofia university until GM Dimitrov. Here I visited the museum for social arts. The visit took not as much time as expected and the mountain was still in the clouds. So go on with plan B. I went by metro until Sofia Business Park, where I was lost. Going to the mountain did not make sense, so I decided to go to the national historic museum, to experience more of the Bulgarian history. But far and wide the was no taxi.

With a little help of google I found a bulgarian website, which showed me routes for the public transport. This website was a bit complex and slow, but in combination with copy and paste to google maps it was possible to find the bus I needed. With line 111 I went for approx. 20 minutes via the ring-motorway until the museum.

The building of the national historic museum is very interesting and has a clearly socialist architectural style. It was the residence of the former president Todor Schiwkow. But also at this museum I was a bit faster than expected. The building is impressive but a bit run-down. It looks larger from the outside and I was unhappy, that you never get to the windows to enjoy the view on Sofia, which could have been great from this place. 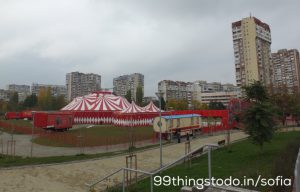 My next possible thing to do in Sofia was the circus. Right. The circus. I passed it already on Saturday and thought, this would be the perfect finish for my Sofia trip. So I went by Tram to Russian Monument Square and from here some meters walking until the park Vuzrajdane where the Circus Sofia resided. But unfortunately – no show today. That`s not much good. I went to the hotel, pack my bags for Athens.

My hotel surprised me on the last positive again: Due to the very early flight, they prepared breakfast to go for me, called a cab accepting credit cards and printed my ticket. Thanks to Best Western Plus Bristol, Sofia! (what a name!)

By taxi to Sofia airport

Much to early I had to leave the hotel on Monday morning, so I had no choice but taking a taxi to the airport – and I am enthusiastic. The hotel called the taxi at 4:30 and it arrived 3 minutes later. The driver did not speak english, but understood, that I wanted to go to terminal 1 at Sofia airport. Driving through the city I wasn`t sure if he is going the right way, but on the urban motorway I realized that he is a good guy. We drove with 140 km/h over the empty streets and after 15 minutes I arrived at the airport – at the right terminal. Also the price was surprising. I had often read, that a ride by taxi to the airport took approx. 10 € and so I expected a bit more for my nightly tour. But noway. The taximeter showed 14.07 Lev – a bit more than 7 €. So I could easily pay cash with my last 15 Lev. 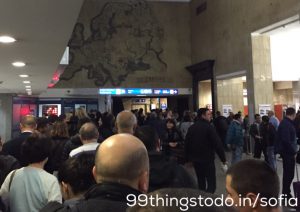 Terminal 1 was really crowded, Ryanair was totally right with the request to come 2-3 hours earlier. In the end I needed 20 minutes until security check. My big advantage was, that I had no luggage to check in. Otherwise, I would have had to queue two times.

Until 10 minutes before departure of the aircraft there where still people running to come with us… and in contrast to an earlier personal Ryanair experience – they all got the flight.

Sofia made a really interesting impression on me. On the one hand the city is still run-down – on the walkway outside the centre you cannot look on your iphone while walking – you would break your legs. Many houses are in a really bad condition. On the other side, you enjoy the full power of a developing metropolis in Eastern Europe with at least 1.2 ml inhabitants.

There are some shopping malls in Sofia and in the real centre there are some nice historic buildings renovated. I dread to think, how it may look, if the city comes to money at one time. The boulevard „Vitosha“ is a beautiful long and broad shopping street, which is full of life on a Saturday. Walking through the side streets you see many old houses, waiting to come back to life again.  There are also a lot parkways, old villas, needing more than just new color. But there are also many housing blocks, which seemed to be in a bad condition.

Sofia is the perfect place for a(n) (extended) weekend trip:

I will visit Sofia or Bulgaria again. When I was there, several trips came to my mind, like Rila Monastery and Boyana church, Plovdiv and Bachkovo or mount vitosha. Bulgaria is not only old housing blocks, but there is a lot to see and explore. And also in Sofia there might be more to see, than I explored within the two days of my stay.

But now I`m going to Athens 😉